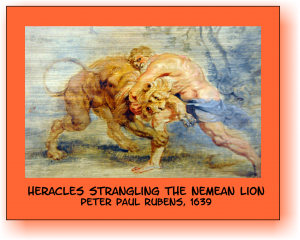 Heracles is a hero from the Greek mythology (In Rome and in the modern West he is known as Hercules). He was the greatest of the Greek heroes, and a symbol of masculinity. Heracles was an extremely passionate and emotional individual, capable of doing both great deeds for his friends and being a terrible enemy who would wreak horrible vengeance on those who crossed him.

Many popular stories were told of his life, the most famous being “The Twelve Labours of Heracles”.

The first labour for the hero Heracles was to rid the Nemean plain of the wild, enormous and extremely ferocious beast known as the Nemean Lion. This huge creature was the son of the monsters Typhon (who had 100 heads) and Echidna (half maiden – half serpent), and brother of the Theban Sphinx. 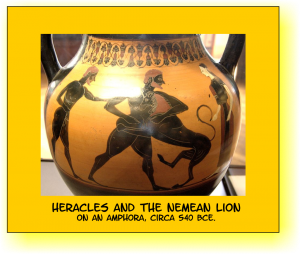 Heracles set out to find the monster, which roamed the land of Argolis. Armed with his bow and arrows, (in some versions usually the Classical period he also had a bronze sword) and his club (made from an olive tree which he tore up from the roots). Hunting through the Nemean forest trying to find the lion’s lair, he suddenly stopped in his tracks when he heard a fearsome roar. Heracles turned and saw the huge lion rushing toward him. Quick as a flash Heracles drew his bow and released an arrow, but it failed to harm the lion. As the monster bore down on Heracles he quickly fired another arrow, and again it did no harm, the bronze heads bending as if hitting solid rock; the skin of this creature could not be penetrated by the sharpest of points. The lion pounced, but Heracles smashed his heavy club into the oncoming monster, stunning it. 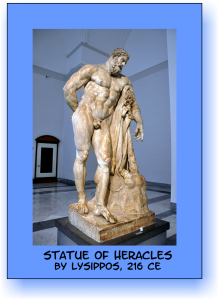 Realizing no weapon could kill this monster he rid himself of them, and fought the monster with his bare hands, with incredible strength, Heracles wrapped his great arms around the lion’s neck and strangled it to death. Once the huge monster was dead Heracles set about skinning the beast, but the skin was so tough he could neither tear nor cut it. Then he tried the enormous claws which were very sharp, this time it penetrated the hide and Heracles removed his trophy. Realizing how impenetrable it was he threw it over himself as a cloak, and pulling the head over his own as a helmet making the pelt into armour which would make him even more powerful. From this time on the skin of the Nemean Lion became one of the attributes of Heracles, and so did the olive-wood club.

In art the hero is usually depicted wearing the Nemean lion skin, its jaws forming the peak of the helmet while its great clawed paws are knotted at his chest forming a hooded cloak, and he is usually leaning on his club, or hanging it on his shoulder.

As part of the Colour and Learn series, Wize Az has prepared a drawing for you to colour and hopefully learn.

For best results, please click on the image to bring it to full size and then print. 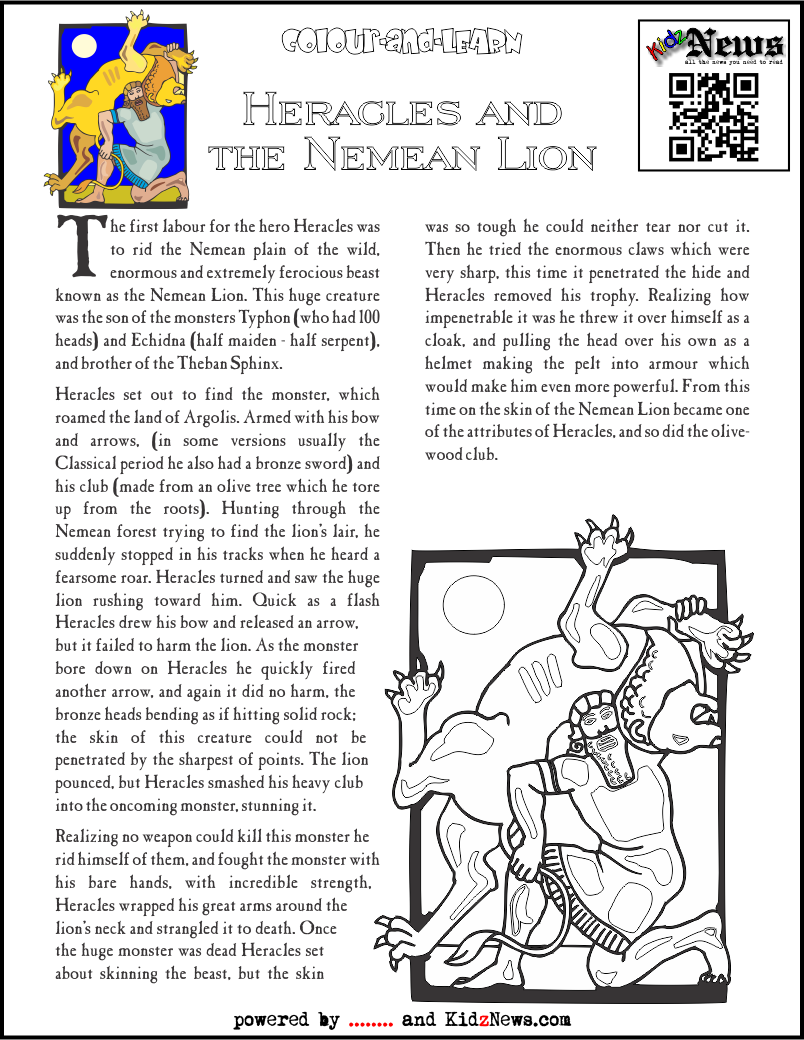 ← Truffle Hunting Dogs
Flipping the classroom – the future of school? →