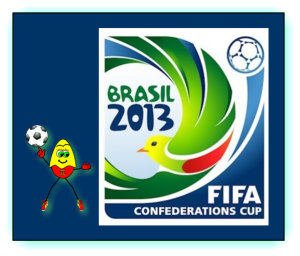 For all you soccer fans and fanatics – The FIFA Confederations Cup is in full swing in Brazil from 15 – 30 June. It is like a dress-rehearsal for the World Cup taking place next year in the same place. The 8 teams that made it to the Confederations Cup are: Brazil, Italy, Japan, Mexico, Nigeria, Spain, Tahiti and Uruguay

The FIFA Confederations Cup is an international association football tournament for national teams. It is held every 4 years. The teams are the holders of each of the six FIFA confederation championships along with the FIFA World Cup holder and the host nation, to bring the number of teams up to eight. (6+1+1)

What are the 6 continental confederations?

There are six association football continental championships for national teams from each continental confederation,

The Confederation of African Football (CAF) 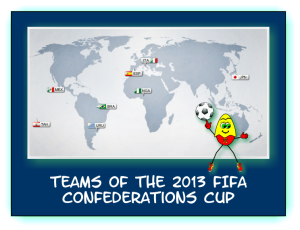 Since 2005, the tournament has been held in the nation that will host the FIFA World Cup in the following year, acting as a rehearsal for the larger tournament. Brazil is hosting the 2013 FIFA Confederations Cup from 15 to 30 June.

The tournament was originally organized by and held in Saudi Arabia and called the King Fahd Cup (Confederations Winners Cup or Intercontinental Championship), contested in 1992 and 1995 by the Saudi national side and some continental champions. In 1997, FIFA took over the tournament, named it the FIFA Confederations Cup and staged the competition every two years.

Whats on the emblem?

The Official Emblem features a stylized interpretation of Brazil’s national bird, the Rufous-Bellied Thrush (for those of you that dabble in Latin: Sabía-Laranjeira).

We have an article about UEFA Champions league held recently. Please click on  the picture below.

Who do you think will win the Cup?

The greatest goals in FIFA Confederations Cup history. Might not be available in all areas or for all devices.


A Promo for the Confederations Cup. Might not be available in all areas or for all devices.

Enjoy one of Neymar’s goals – He is the superstar of Brazilian football today. Might not be available in all areas or for all devices.

← Helping save the Rainforests with Android phones
Ride the subway for 30 squats! →