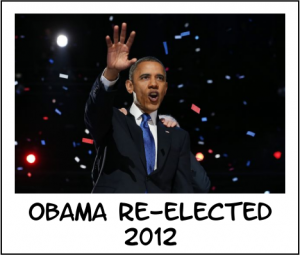 On November 6, 2012 the citizens of the United States voted for President. They chose President Obama for a second term.

Here is a quick breakdown of the voting system in the United States:

When Do You Vote?

Every four years, the people of the United States choose a President. An election takes place on the first Tuesday after the first Monday in November. This year the date is November 6.

In the mid-19th Century, the US was an agrarian nation and it simply took a lot of time for farmers to drive the horse and buggy to the nearest polling place. Saturday was a workday on the farm, travel on Sunday was out, and Wednesday was a market day. That left Tuesday.

Who Can Run for President? 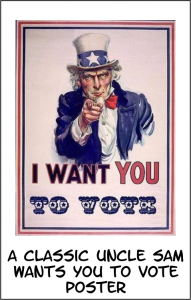 It is free to vote in the national presidential election, as long as the voter is a naturalized or native-born citizen of the United States, and at least 18 years old. Before an American citizen can cast a vote, they must register in the state in which they live. A person who is in jail, or someone who is on probation for committing a felony, (serious crime such as murder or robbery), cannot vote.

How Do You Vote?

Some people vote by punching a hole in a card, some use computers with touch screens, some people vote using paper ballots and then scanning them or by putting an X in a box next to the candidate’s name. You don’t vote for the President directly, but indirectly! You vote for a member of an electoral college.

What is the Electoral College?

Under the Electoral College system, each state has a number of votes which is linked to its number of members of Congress, and reflects its population. The most populous state, California, has the most votes, 55, while other large states like New York and Florida each have 29. The least populated states, Montana, Vermont and Alaska, for example, have just three votes.

A presidential candidate needs 270 Electoral College votes – a majority of the 538 available – to win.

Fun Fact: It is possible for a candidate to lose the popular vote and still be elected president by the Electoral College. Four presidents have been elected in this manner: John Quincy Adams in 1824, Rutherford B. Hayes in 1876, Benjamin Harrison in 1888 and George W. Bush in 2000.

This year, there are several people running for President of the United States, but the two major candidates are former Governor of Massachusetts Mitt Romney and President Barack Obama.

To rate the US Presidents, please click on the seal of the President below:

← The Ant & The Grasshopper
Rate the US Presidents →