Today marks the 75th Anniversary of the screen debut (first appearance) of Bugs Bunny. On April 30th, 1938 Bugs Bunny started his career with the animated short film called Porky’s Hare Hunt. In this film he was called “Happy Rabbit”; he became Bugs Bunny in 1940.

This adorable carrot munching rabbit has been entertaining generations of people all over the world. Who doesn’t know his catch phrase “Eh… What’s up, Doc?” 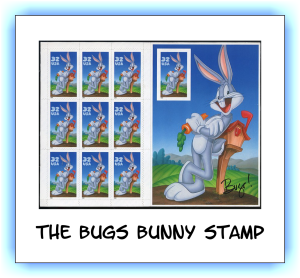 Throughout his career, Bugs has appeared in more than 200 cartoons, animated movies and TV commercials. He has his own postage stamp and a star on the Hollywood Walk of Fame

Fun Fact: Bugs has appeared in more films than any other cartoon character.

Enjoy the short animated film Porky’s Hare Hunt from 1938. Video might not be available in your viewing area.


A collection of some funny moments with Bugs Bunny. Video might not be available in your viewing area.