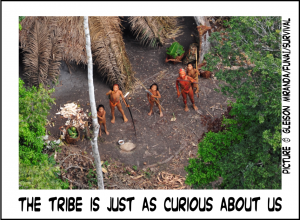 These astonishing photographs show uncontacted Indians living in Brazil, near the Peruvian border. “Uncontacted” means that the tribes have no peaceful contact with what is considered the mainstream world, or the dominant societies.

From the pictures we see a thriving, healthy community with baskets full of manioc and papaya fresh from their gardens.

Although some of the tribes are monitored from a distance by the Brazilian Government, very little is known about them. We know that the uncontacted Indians seen in this part of the Amazon move across the rain forest at different times of the year. They live in the heart of the forest when water levels are high, and camp on the beaches when the water levels recede. 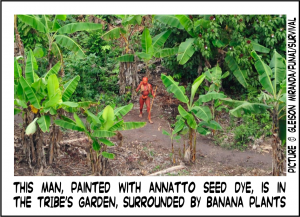 We also know that they have little understanding of cars, hospitals, banks or the Internet. The expert on uncontacted tribes José Carlos Mereilles said it very well: “They are the last free people on earth” — free from the influence of governments, the subliminal powers of advertising and the media and the thoughts of others.

All else about their lives — their languages, their names, their gods, how they raise their children and what they hope for — is speculation.

Today, it is estimated that there are over 100 uncontacted tribal peoples around the world. 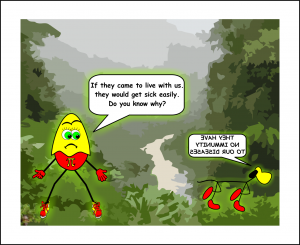 Like for most things in our world there are big debates. Some say we should make them part of our society, others say “leave them alone”.

← Which Movie will win the Oscar for Best Picture in 2013?
Planting trees for newborns! →