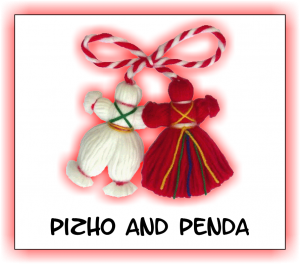 On the first day of March and for a few days afterwards, Bulgarians exchange and wear white and red tassels or small dolls called “martenitsa”. The name of the holiday is Baba Marta (Grandmother March). It is the ending of winter and the beginning of spring.

Martenitsa is a small piece of adornment, made of white and red yarn and worn from March 1 until around the end of March (or the first time you see a stork, a swallow, or a budding tree). The red and white woven threads symbolize the wish for good health. Martenitsas are the messengers of the coming of spring. No one is absolutely sure where the colours come from. 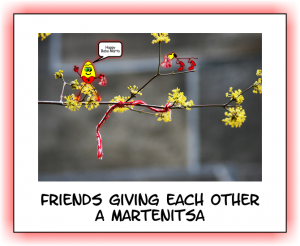 An obvious explanation is that white as a colour symbolizes purity, red is a symbol of life and passion, thus some scientists have proposed that this custom might have reminded people of the constant cycle of life and death, the balance of good and evil, and of the sorrow and happiness in human life. Another popular explanation is that white stands for wisdom and red for good health, which means that anyone giving you a Martenitsa is wishing you both throughout the New Year.

In March, martenitsas, worn around the wrists and on the clothes, can be seen almost everywhere in Bulgaria and in the neighbouring regions. Baba Marta is one of the oldest, still existing traditions in Europe. 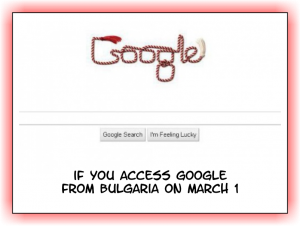 Many people wear more than one martenitsa. They receive them as presents from relatives, close friends and colleagues. Martenitsas are usually worn pinned on the clothes, near the collar, or tied around the wrist. The small dolls are called Pizho and Penda. Pizho is the male doll, usually in white. Penda is the female doll, usually in red, and is distinguished by her skirt.

← Will you be my Valentine?
Lawns, strawberries & cream, and a spot of tennis →