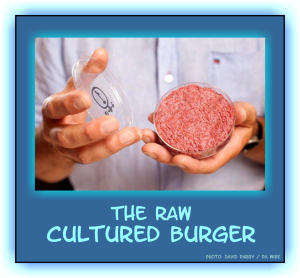 Actually burgers don’t grow on trees, but now they grow in labs! The world premier of the first cultured beef burger was held a few weeks ago in London, England. It was cooked up and served to two food experts. The meat took three months to grow in a laboratory from stem cells taken from a cow.

Tell me some more about this burger, please?

The cultured burger, or as some call it the “in vitro” burger was developed by Professor Mark Post at The Maastricht University in the Netherlands using stem cells from a cow. It is a standard red meat patty shaped like a circle and it was combined with other ingredients normally used in burgers, such as salt, breadcrumbs and egg powder. The burger testers both agreed that the cultured burger is not as fatty as the normal meat, but has a similar consistency.

The project of producing edible meat from stem cells was launched in October 2011. 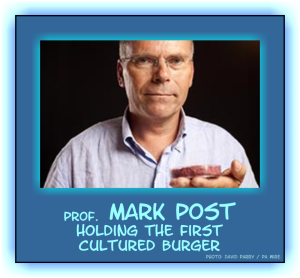 What is Cultured Beef?

Cultured Beef is created by painlessly harvesting muscle cells from a living cow. Scientists then feed and nurture the cells so they multiply to create muscle tissue, which is the main component of the meat we eat. It is biologically exactly the same as the meat tissue that comes from a cow.

What are stem cells?

Sounds very fancy and expensive, was it?

Well, it is probably the most expensive burger in the world! The man who gave money to create the world’s first lab-grown hamburger is Google co-founder Sergey Brin. The price of this yummy masterpiece is $325,000 (€240,000). 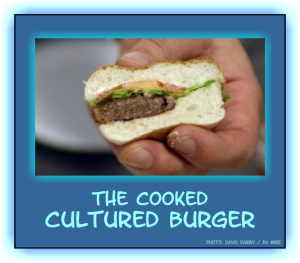 Bore me with numbers, please!

The project of producing edible meat from stem cells started in October 2011.

Cells taken from one cow could produce 175 million burgers. Modern farming would need 440,000 cows to make the same amount of burgers!

Global meat demand estimated to increase 73% by 2050, but we already use 70% of farm land for livestock!

Let’s wrap it up

The idea of the project was to show the world that in the future meat will not necessarily have to come from the slaughtering of millions of animals.

Cultured meat, in comparison to conventional meat, would have a number of environmental benefits like reduction of water, land and energy use, and fewer emissions of greenhouse gases. The animal rights group PETA has thrown its support behind the lab-meat initiative.

Depending on how the stem cells were obtained, no animals might need to be killed to make the meat.

Like with everything else, there is opposition from somewhere, but Sergey Brin of Google seems to think that some opposition to a new idea is natural, and even encouraging. “If some people don’t see this as science fiction, it’s probably not transformative enough,” he said. Visit the Maastricht University site by clicking on the logo below:

Please enjoy the videos. Might not be available in all areas or for all devices!

← Dogs Driving Cars – What!?
Leaping From the Edge of Space →