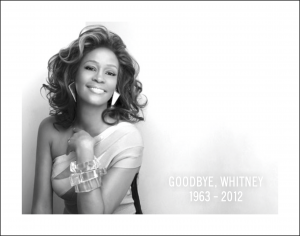 World Pop Icon Whitney Houston, famous for hits including “I will always love you” from the film “The Bodyguard”, was found dead Saturday in a Beverly Hills hotel. She was 48.

Whitney Elizabeth Houston (August 9, 1963 – February 11, 2012) was an American recording artist, actress, producer, and model. In 2009, the Guinness World Records cited her as the most-awarded female act of all time.  Her awards include two Emmy Awards, six Grammy Awards, 30 Billboard Music Awards, and 22 American Music Awards, among a total of 415 career awards in her lifetime. Houston was also one of the world’s best-selling music artists, having sold over 170 million albums, singles and videos worldwide. She began singing as a child at Newark’s New Hope Baptist Church, where her mother, Grammy Award-winning gospel singer Cissy Houston, led the music program for many years. Whitney’s cousin singer Dionne Warwick also sang in its choir.