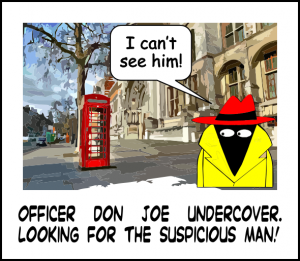 The Telegraph reported a very hilarious story: A young undercover police officer, who we will call Don Joe, was doing undercover work in a market town in the county of Sussex in South East England. He was dressed in an inconspicuous yellow jacket!

At the same time another officer, who we will call Jack, was monitoring the street cameras. As Jack was looking at the market, he noticed a suspicious looking man loitering around a phone booth. He immediately radioed officer Don and soon both were on the suspect’s heels – officer Jack controlling the monitors and guiding the chase, and officer Don running on the streets after the suspicious man. The chase went on for 20 minutes, with officer Don missing the suspicious man just by a few seconds.

The funny thing is that neither of them realized they were chasing shadows.  It was the police sergeant who recognized that the “suspicious man” and Don Joe were the same person!

I am watching you, watching me!

It’s one thing to look and another to see! 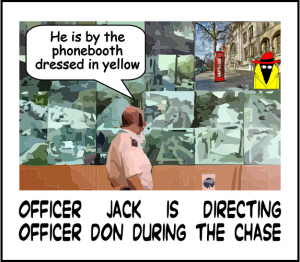 ← Goodbye, Whitney
Spring Is In The Air →